Make Your Own Institutions

Make your own institution

A lecture for Valand Academy (SE), at Glasgow International about self-organizing and the artist-run sector. By Visual Artist and Curator Signe Vad, 2012 (edited in 2021)

I work with self-organizing structures because I believe it is a way to approach the world: do you enter the already  generated structure and fit in; or do you take action to influence and change the existing structure.

In this lecture I will share a little of my experience with being an initiator and curator within the field of self-organizing and artist-run platforms. My experience is built on agency within the field of facilitating artist-run projects; from  opening and running several exhibitions-spaces in Cph and from curating/coordinating within the sector.  Besides that, I am co-founder of AIM, Artist-run Initiative Meetings -Europe, which from 2010 and forward workes with  developing networks and knowledge for the artist-run sector in local areas around Europe; especially focusing on  interacting in local scenes of the artist-run sector, enhancing the local networks and providing knowhow and exchange.

Why did I begin?

My motivation is always to address and challenge something I consider needed or important. I had the idea that when  you get involved in doing something for the whole society (in this case art-society) you become an active part, which  means you get some kind of influence, gain agency, and therefore you become able to create your own artistic disturbances.

I opened my first gallery back in 2005 because I thought the photographic art scene in Cph was very “old fashioned”. I had been to a dinner party where some Cph artists again complained about the situation of the art-photographic  scene. Soon after, when I closed down my darkroom and the photo-studio in my workshop, I decided to make the  space into a gallery for photographic art. I knew nothing about running a gallery, but as so often I just threw myself  into things, learning as I went along. And I did a lot of stupid things and made a lot of mistakes along the way. But I also  all the time gained more and more knowledge and practical experiences to go on.

It turned out that around the same time as I opened the exhibition space, there were a boost in the art scene for  photographic art, so instead I decided to change the focus.

Now something else became of great importance. The art world of Cph was flowing with money, and commercial  galleries popped up like mushrooms, everybody wanted a piece of the gold-stream.

I decided that an alternative platform was of great importance, an underground place with a nonprofit profile and a

totally different agenda. I was collaborating a lot with people from the noise music, sound art – scene. I wanted to have  an energetic art space.

… this was also the main reason I later was forced to close, by the building administrators. 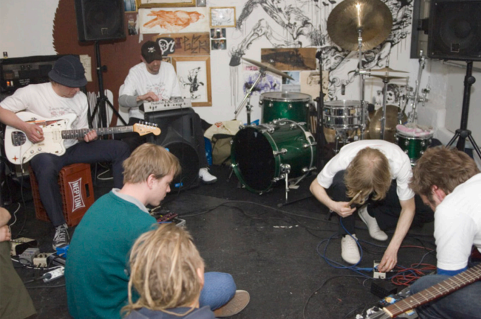 I continued however with curating exhibitions in two windows at the street. There I had an exhibition program running  for three years, with new exhibitions every month.

This I could do at the same time as staying in Gbg, because it was set up in a way that demanded not so much practical  or physical attention. Which is also the reason I could keep it running for so long.

In the Windows: Liquid – a stereo-photogrphfic project by Thomas Seest, 2008 Anne Langgaard, the Order of Things, 2010

In my experience one of the biggest problems in the moneyless self-organizes world, is that you burn out after a while  being full of initiatives and energy, you end up being really tired. I this field there is almost always too few hands to  carry a big load. I have tried this a few times, but after awhile being fed up with it all. 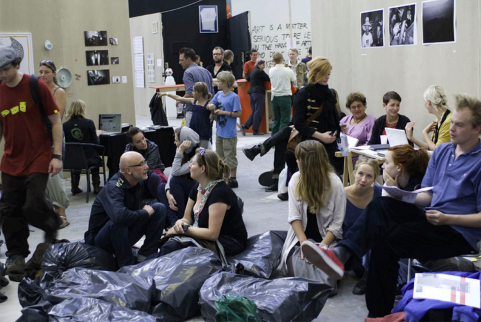 One day in February 2009, I received a phone call and, a short conversation later,

I had taken on the responsibility for Copenhagen’s alternative art fair for 2009.

I had never arranged a big event like that, and there I was… responsible for trying to tame an uncontrollable space,  and for inviting all the self-organized initiatives and non-profit ideas.

I had to thoroughly consider, what the whole idea was about, and then, which perspective, I wanted to place over the  concept for Alt_Cph 09.

Was an art fair, for non-profit, artist-led initiatives and exhibition spaces, necessary, or even important? Was there a need for a specific platform, which could bring together, illuminate and promote this environment?

Nowadays, many artists establish their own exhibition spaces. This provides a strong degree of autonomy, but it also  means that the art is displayed in small and, sometimes, relatively anonymous pockets of space, throughout the city.  However, creating one’s own exhibition platform, outside the commercial art market and the established art  institutions, has one powerful and essential consequence, and that is the existence of an “other” space, where artists  can develop and re-think contemporary art practice, a space which provides fewer restrictions on experimentation,  and also develops and professionalizes the artists, through achieving more exhibition experience.

For Alt_Cph09, I chose to use the “profit-free initiative”, as my framework, or guiding principle, as curator.

My inspiration came originally from the music scene, I had been an active guest to a bunch of noise concerts, events  arranged in basements, old churches etc. around in Cph. The focus for the people behind was the experiments in  music and sound. They had a parallel music environment, where everybody who played this genre could participate.  And they were more internationally connected, then connected to the conventional music scene in Cph. And it was  never about money or fame.

So, I decided that it was much more important for me, to invite a broad range of spaces, than to evaluate and select,  on the basis of whether it was “good art”.

This, in the belief that the wonderfully strange and unthinkable re-thinks possess an invaluable potential. I emphasized that the energy, which exists in the profit-free initiatives, should be clearly felt in the art fair hall, by the  participants and the visitors. Therefor I organized a full program with debates, performances and sound art/music  during the weekend. With the intention to make the visitors want to come and stay. I made the shape of the  construction round and in the center of it all was the bar, the meeting spot. In two corners we had stages one with chill  out pillows one with benches and booths was placed like rays from the center all around in the hall. The intention  worked, there was a lot of visitors coming and staying, there was a really great atmosphere and everyone both  participants and guests was really engaging and enjoying the weekend.

The second year 2010 Camilla Nørgård (artist and director of the Factory for Art and Design, that host the fair) and me decided to “open” the space up much more, also in the literal sense.

That year we selected the participating spaces through an Open Call.

Over the past 4 years, we had experienced how, the more we planned and arranged, the more we more we took away the initiative from these, otherwise, strongly motivated active participants from all kind of the  self-organized exhibition platforms. 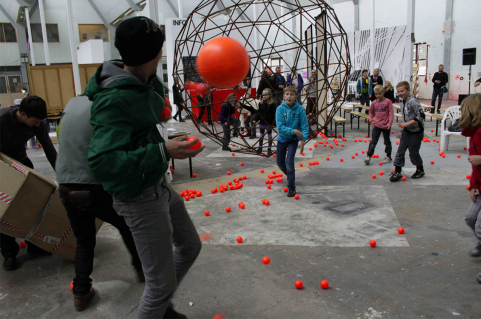 So for Alt_Cph 2010 we did the opposite; minimizing the form, and left it up to the participants to bring their initiative,  and from create the fair. Behind this was the understanding, that agency is the primary energy and foundation for these non-profit, self-organized art spaces. When set free it can grow, expand and create a new space for  experimentation.

-taking some of the agency away from the participants by arranging too much but gaining control of the whole  environment and energy in the project, so it become a consistent whole, for both the participants and the guests.

-giving the responsibility to the participants, to use their agency to shape everything in all kinds of unimaginable ways.  Resulting in a less consistent and well-functioning outcome for the visitor and in the space, but with more diversity and  substance in each of the participating projects.

This was only a shallow dip into a few different thoughts and the dilemmas I have encountered working in this field.  But I hope it have contributed a little to the knowledge and experiences you all already have. I will end with quoting a danish independent curator Tone O. Nielsen from her opening speak at Alt_Cph09 and the  first curator of Alt_Cph Malene Ratcliff from her press release 2007.

“The alternative and critical art remembers what the public forgets repress or ignore. It is the place where blind spots  are visible, where overheard voices can be heard, and it is also the place where wounds can heal, and traumas can be

overcome. It teaches us to rethink the current and shows us alternatives to the existing, it has short, the ability to  imagine the world differently.”

It is our wish to show and communicate how imperative the alternative role is, and to emphasize its potential as a  philosophy for society. Perhaps we have never been in more need of an alternative strategy than today. Malene Ratcliffe, 2007

Make Your Own Institutions, Flags installed at the roof, by Camilla Nørgaard, Alt_Cph 2010